Fun With Beer And Mathematics 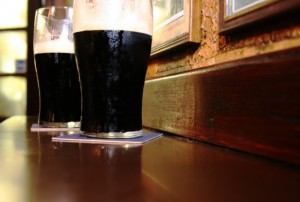 After a long day of toil and trouble, there’s nothing quite like a cold, refreshing beer. As you take your first pull from the bottle or glass, your worries immediately drift away, and as you set your vessel down, you begin to lose yourself in the effervescence of it all, just as the bubbles slowly and continually rise to the top.

That is, of course, unless you’re drinking a stout, such as the popular Irish drink of choice, Guinness.

Irish mathematicians have put their minds and glasses together to understand why Guinness bubbles sink and in the end—and several beers later—they have concluded it most likely comes down to the shape of the vessel.

By running the peculiarity of this liquid dynamic behavior through a simulator, an upward flow can be seen running up from the center of the glass as a downward flow carries the bubbles down to the bottom.

The Irish mathematicians have taken these results and have shown the simulations shift when you change the shape of the glass.

Eugene Benilov, Cathal Cummins and William Lee at the University of Limerick are the mathematicians responsible for this new research, and say the shape of the glass plays a huge part in the way the beer is circulated within.

As bubbles drift upwards, they exert drag on the liquid surrounding them. The mathematicians say this drag is higher in areas where the bubble density is greatest, such as the center of the pint glass. This creates an imbalance which sets up the famous circulation pattern where the liquid flows upwards but the bubbles fall downwards near the walls.

Benilov and company say if a Guinness is poured into a straight, perfectly cylindrical pint, there would be no imbalance and the bubbles and liquid would rise together in harmony; The bubbles would constantly be replenished from the bottom of the glass.

Mr. Cummins created some calculations to determine the effect of density and drag on these bubbles. Armed with these calculations, the team set about their research.

It was here that the team realized the shape of the glass is just as important as the calculations.

“Because of the sloping wall of the pint, the bubbles are moving away from the wall, which means you’re getting a much denser region next to the wall,” Dr. Lee explained to the BBC.

“That is going to sink under its own gravity, because it’s less buoyant, and that sinking fluid will pull the bubbles down.”

Dr. Lee said the bubbles are actually trying to rise, but the circulation within the glass creates an unsavory environment for rising.

“You’ll see sinking bubbles not because the bubbles themselves are sinking, but because the fluid is and it’s pulling them down with it.”

The team said it was much easier to study this effect in Guinness and other stout beers because of the use of nitrogen. Stouts often contain nitrogen as well as the carbon dioxide found in all beers, and as nitrogen dissolves slowly in liquids, it creates slower, longer lasting bubbles with which to study.

“One of the things we found was it’s actually very easy to see bubbles forming in stout beer rather than in, say, champagne where the bubble formation process is much more violent,” said Dr. William Lee, according to the BBC.

Just like beer, science is often more fun when it’s shared. The team says anyone can observe this behavior for themselves next time they head to the bar. The effects are best seen when a stout is served up in a straight-side, cylindrical glass, not quite filled to the top.